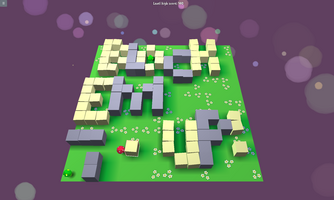 So much has changed in the last weeks!

The first big change: After seeing too many friends being crushed by the monsters, I made the monster mechanics more friendly and interesting: Monsters start out small and harmless. But if two happen to jump into one-another, they merge into a bigger and more dangerous monster. At the same time, players might actually want them to merge so that it’s fewer of them.

The second big change: I switched the graphics to a 3d-cartoon look. I’m still impressed how much 3d rendering is possible from within the browser nowadays, and I want to use more of these wonders! So, now, the graphics use perspective. I’ve also added a few particle effects.

The game has come a long way since the original pre-alpha: It now has progress tracking, better controls (including game pads!) and a lot of new levels. With the new monster mechanics and look, I’m confident to have arrived at the direction I want to go. Therefore, I consider the version 0.2.0 released today as the first alpha version of the game.

While there still is a lot on my roadmap (most notably sound), I think the game is at a stage where patient players with an affinity for puzzles might already enjoy it. I hope you do! …and I’m looking forward to your feedback!

Use the boxes, trap the monsters!